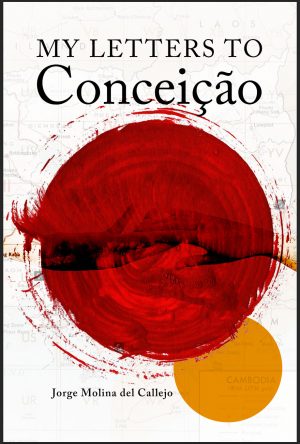 Available in Ebook and Hardcover

“I know it has been longer than a decade since I last wrote to you. I feel anxious and maybe a little hesitant about taking this step, but I know now that I have no choice whatsoever. On the first day of this year, I already know that my life has changed forever and that I will never be the same again.”

An unusual epistolary novel of lost love, mystic fantasy, and the search for meaning in life, wrapped up in a world-wide travel log of people and places.

While on a business trip to Cambodia, a man is given a package of letters by a mysterious elderly woman. All of the letters, none of which have been mailed, are addressed to someone in Mexico City named, Conceição. What the businessman finds within the letters, is the love story of a man named Vasco, in his early thirties, who has decided to recount the story of his life to his first love Conceição, whom he lost many years earlier.

At first, it is evident that Vasco seeks closure, and to rid himself of an emptiness he’s felt since Conceição’s departure. But, as one letter turns into dozens, the correspondence becomes a journey itself describing not only his desolation, but his life and adventures as well.

As Vasco travels the world remorseful over his lost love, he begins to have strange visions of the future along with haunting dreams of a girl named Sok Meta. Continuing his journey, Vasco becomes convinced that Sok Meta is real and that she is his one, true soul mate. Consumed with passion and longing, Vasco seeks out Sok Meta, only to find that he must undertake one last, desperate leap of faith before he can know the meaning he has long sought and be with his one true love, Sok Meta.